Christians Unite: Put The Devil On The Run 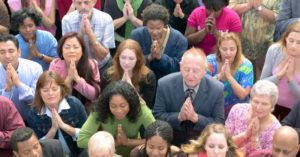 Many Christians and their religious denomination strive to be different from others…to set themselves apart in a superior way than their Christian brothers. I understand churches and denominations push their wares…their denominational distinctiveness. One denom. even purports ‘We are the closest thing to the New Testament Church! Oh really. Its funny. I’ve asked How so? and they can’t tell me. Its like striving on purpose to make sure we at least think we’re different and not associated with them kind of mentality. One hand I get it. Beliefs vary; some by little, others by more. You want to be accurate but I don’t know any that are most accurate. Some seem to do well in some areas but then fall short in other areas. On the other hand, its divisive to the Body of Christ.

Jesus said ,when his disciples drew attention to  persons who preached his gospel but just didn’t run in their circle, that if someone was not against him that they were for him. He wasn’t put off by any who didn’t oppose him or were closely related. Apostle Paul, in his letter 1 Corinthians chapters 1-2, chided the Corinthian believers for arguing and striving over who was led to the Lord, spiritually-descended and discipled by Paul, or Apollos or Jesus; tracing their spiritual lineage back as if that really mattered. That’s immature and carnal, prideful. Those are his words, not mine. He told them it didn’t matter. Don’t argue over genealogies: who your spiritual daddy and grand-daddy is and such.  As long as people are directed to life in Jesus Christ and to follow him…that’s what was important. Those kinds of prideful arguments are similar on denominational levels.

Denominational distinctive are fine as long as we don’t use them to compete, criticize and condemn fellow Christians. We should all be working toward His Kingdom and purposes, not the kingdom of Southern Baptists, Nazarenes, Calvinists or Pentecostals so any can say Hey, we got more numbers than they did this year! That kind of hoorah doesn’t celebrate God’s victory. Remember Jesus’ Model Prayer ends like this…”for thine is the kingdom, and the power, and the glory forever, Amen.” That can also be paraphrased ‘the kingdom is Yours, the power is Yours and the glory is Yours’. I say be loyal to God’s Kingdom purposes. He’s going to celebrate what’s done in the name of His kingdom. Too much emphasis on differences diminishes the power and unity of the larger, broad Body of Christ.One Christian denomination prides themselves on being ‘the largest’. I guess that’s something. Is He going to give out trophies in Heaven for stuff like that? I don’t think so. The Body is weakened when believers and churches criticize and compete against one another when the real enemy and competition is Satan and his dark forces.

Some Christian leaders accept the ‘inner Body’ criticisms, condemnations, comparisons and competition as normal, not recognizing that it is a ‘house divided, fighting against itself’. It is the Body of Christ deceived & divided, a weakened front line.

Do not be afraid of working together with another church or denomination! Thats how it is in Heaven, right? There aren’t any divides going on up there. Jesus told the disciples to pray “thy Kingdom come, thy will be done on earth…as it is in Heaven…” How is it in Heaven? Unified. How does God want it here on Earth? Unified. Ecumenicalism isn’t a dirty word. Working together for God’s purposes and sharing in the work and harvest together for Him is the bigger picture we should have. And the territorialism. Who cares if several churches are evangelizing the same neighborhood and people. I’ve told people If you don’t like our church, find one you do that preaches the Word, but attend somewhere. This ones closer to you.  One wise fellow pastor told me “Its ants like eating an elephant…there’s enough to go around for everybody.” This opposing church/competing denomination notion is not of the Lord. We need to see this. There’s a fear behind that. We don’t have to be afraid of working together or a church/denom. gaining more members. We don’t have to be afraid of non-essential differences nor make them bigger than they really are by looking at them with a telescope.

What changes in people and society could occur if believers in Christ prayed for one another and their unity! Well, if we become more alike, we won’t be so different and we won’t know who we are anymore! Oh, if that would only happen. What a marked difference we’d see by the Body of Christ united! What growth, joy and love in the Body! Then non-believers would look at us and say ‘They do love one another! They must be real followers of Jesus Christ.” Jesus said they will know you by your love for one another…by that one distinguishing trait. Not by how you baptize, how you pray, how you worship, what you wear, drink or don’t drink, or by how pious you are or a denomination name tag.

If you like your name tag, fine. But put down criticizing one another. No one denomination has it together better than another. Be loyal to His Kingdom. Pray for churches around you…even a different denomination,..for unity in the Body of Christ, for brotherly love and strengthen the Body of Christ wholly, and see the difference it makes when the Body collectively pushes out the darkness.